This week involved a lot of preparation for my upcoming trip, with a few fun breaks in between!

On Saturday, Erin and I decided last minute to go to Versailles for the day. We met at the train station there, only about 50 minutes from me. We had lunch at a local cafe then headed to the palace and gardens. Lucky for us, Versailles still had about 5 inches of snow on the ground so the palace complex was beautiful! We made our way though the chateau then wandered the top part of the gardens in the snow. February is off season in France so it wasn’t too crowded. I think my favorite part of the day was watching school children having a snow ball fight. It was such juxtaposition between the goofing off and the history of the site.

Processed with VSCO with c8 preset

Processed with VSCO with c8 preset

I met some friends on Sunday morning for an early “Galentine’s Day” brunch. We laughed and talked for a few hours. Making friends is hard in a new city, especially in a new country, but slowly I’m expanding my circle and meeting really cool and interesting people! Very thankful for that.

For Valentine’s Day on Wednesday I made a special heart-themed dinner! Valentine’s Day, like most holidays, isn’t widely celebrated here, but the kids knew what it was and I ran with that. I did build-your-own heart-shaped pizzas and cucumbers cut into hearts. The kids had fun decorating the pizzas exactly how they liked. With the left over pizza dough, we made tiny pizzas in the shape of a V, B, and A for their initials which *may* have been a bigger hit than the hearts but whatever. 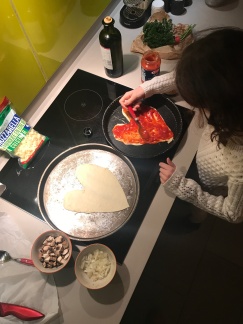 Thursday afternoon, my littlest and I made mini tarte aux pommes, or apple tarts, after school. I had never made them before, and was going into it with only an abridged verbal recipe from my host mom, but they ended up turning out great! Making things with kids is a big lesson in patience for me, as I always want to do things as quickly as possible, so that was a welcome reminder to slow down at the end of the week.

Today, I’ve been packing and getting ready to leave in about 3 hours for the airport to start my next two-week vacation! Tonight, I’m flying to Oslo, Norway for a few days! Pray for me and my thermal underwear to survive the cold!! I’m really looking forward to exploring a country unlike any I’ve been to before. After that, I’ll be meeting some friends in Copenhagen for another few days before heading back to Paris to pick up two very special guests….