My third and final destination on my break took me to Krakow, Poland. When I started this year abroad, I knew I wanted to take advantage of the opportunity of living in Europe and travel to destinations I haven’t been before/ may not have the opportunity to come back to. This influenced my decision to vacation in Poland. Also, Poland consistently topped the lists of “least expensive destination in Europe.” So I booked a plane ticket and a really inexpensive Airbnb and I was off!

On my way over, I flew Paris to Vienna to Krakow. The hour long flight from Vienna to Krakow was on a propeller plane! It was seriously so wild. My window looked out over the right propeller which made for a crazy view from the plane. 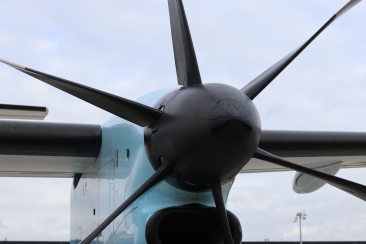 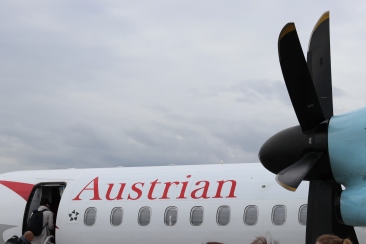 My travel day started with a 6 a.m. Uber so I was pretty exhausted by the time I got there. After I settled into my Airbnb, I quickly found out that the sun set at 4:15 p.m. in Poland! For a low key dinner that night, I got take-out from a pierogi place close to my Airbnb. Pierogi is a traditional Polish dish of filled dumplings. While they tasted great, they had almost 0 appeal based on appearance so I’ll spare you a picture haha. As with my previous vacations, I had three full days in Krakow which ended up being the perfect amount for this charming Polish town.

My first, VERY cold, day in Krakow started with a free walking tour. This was my first experience with a free walking tour but I can not recommend this enough! What a perfect way to see a city, especially one you know nothing about. I learned so much on my 2 and 1/2 hour tour. We walked all over the Old Town and made our way from the historic entrance of the walled city center to the Wawel castle complex. 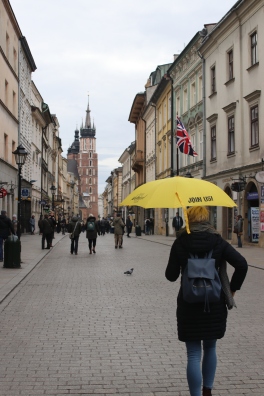 I had no idea of the rich history of Poland and Krakow specifically. In the past 200 years, Poland has been a country on the world map for only 48 years! It was first ruled for 123 years by the Austrian-Hungarian Empire, Russia, and Prussia. After regaining it’s independence after WWI, it was erased again after the Iron Curtain fell on Poland after WWII until 1989.

During WWII, Krakow was chosen as the capital of a new German state called the General Government. This meant that all of the architecture of Krakow was preserved- and I’m so glad it was. The Main Market Square, the heart of the Old Town, is the best place to experience the beautiful architecture of Krakow. The buildings reflect the long history of the city, every building reflecting a different period in architecture. It’s really incredible. 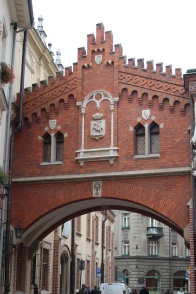 For my first lunch in Krakow, I went to a traditional milk bar. These restaurants are cafeteria style: you literally grab a try and go down a line and point to the food you want. Milk bars often sell traditional Polish dishes aka a lot of meat and potatoes. The food was so. good. I had so much, I couldn’t even finish it all and the whole meal cost about $8.

(Side note about Poland: the exchange rate for dollars is INCREDIBLE! seriously, everything was so cheap. I never paid more than $10 for a meal. After living with the euro for 2 months, this was greatly welcomed.)

As it was November 1st, All Saints Day was being observed and basically everything in Krakow was closed. This led me to have an early dinner at a place recommended by my Airbnb host and another early night in.

Krakow’s Jewish quarter, Kazimierz, was only a 15 minute walk from my Airbnb. After my successful free walking tour the day before, I did another one on Kazimierz and WWII. Our tour guide gave great insight into the history of the Jewish community in Krakow and what they faced during the Nazi occupation of the city.

From Kazimierz, our tour took us across the river to the site of Krakow’s ghetto. Some of the original exterior walls are still standing and it was really heartbreaking to see that. 15,000 Jews were crammed into an area previously inhabited by just over 3,000 people. One apartment would typically house 4 families.

We finished our tour at Oskar Schindler’s factory. Made famous by the movie Schindler’s List, this factory has now been turned into a museum. The museum features the experiences during the war of the three major groups in Krakow: the Jews, the Poles, and the Germans. It was really interesting to see how different life looked for each of these groups in the same city.

I made my way back to the city center to grab lunch. From there, I visited their famous church on the Main Market Square, St. Mary’s Basilica. It was the most beautiful church I’ve ever been in! Every inch of the inside of the church was covered in bright blues and reds. The altar features the largest altarpiece in the world and is a national treasure of Poland. The piece is opened every day at 12:30 by nuns. It was truly magnificent. In a podcast I was listening to recently, I heard someone talking about the connection between art and the act of worship. They were explaining that because God is the ultimate creator and artist, “there is no difference between the creation of art and the act of prayer.” This church was a pure example of this concept. I could really understand how the act of building this breathtaking church was in and of itself an act of worship toward God; an offering of art to the ultimate artist.

Processed with VSCO with m5 preset

Processed with VSCO with c6 preset

From the church, I spent some time in the Cloth Hall. The original trading post for the city, the Cloth Hall stands in the middle of the Main Market Square and is now a covered market, with little booths of souvenirs lining each side. I was able to pick up a few souvenirs here which might just be Christmas gifts for some people reading this so I can’t say what I got but I did take advantage of the great exchange rates!

I ended the night with a Chopin concert. He was born and raised in Krakow but wrote his last, and most famous works in Paris, so it was the best of both worlds for me. The pianist was really incredible and played without sheet music for an hour! 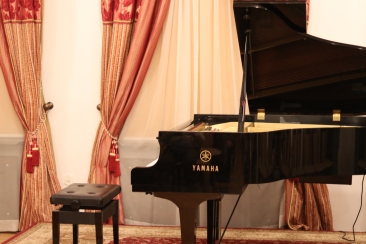 My last day in Krakow I did a guided day trip. Our first stop was to Auschwitz concentration camp, about an hours drive from Krakow. The infamous camp is actually broken into two camps: Auschwitz I and Auschwitz II, or Birkenau.

We started with Auschwitz I, the camp you would have learned about in school. The survivors of Auschwitz have stated that they want people to visit the camp to member them and learn about the horrors that went on there. This camp has been turned into a museum. The barracks serve as a information rooms, telling the stories of the holocaust. Rooms were filled with relics of those who did not survive the camp. One filled with pots and pans; one filled with luggage; one filled too high with shoes. 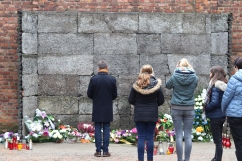 The second camp, just a few miles away, has been turned into memorial. While Auschwitz I was a concentration camp, meant mostly for forced labor, Birkenau was the extermination camp. The camp was haunting. The only buildings on the grounds were seemingly endless rows of barracks and the remnants of the 4 gas chambers. In less than 4 years, 1.5 million people died in Birkenau. 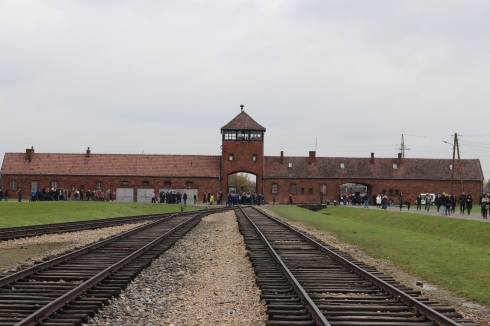 Being at these sites was overwhelming. All day we were hearing stats and figures, but grasping the full extent would take time. In the end, I am glad I visited the camp. It’s good to remind our selves of the history, good and bad, of mankind. It’s important to face the mistakes of history and recognize when we may be starting to repeat them again.

After the camps, we drove back closer to Krakow to the Wieliczka salt mine. Located just about 20 minutes outside of Krakow, the Wieliczka salt mine was first opened in the 13th century when salt was discovered in the area. The mine, 178 miles long and over 1,000 feet in depth. It’s been turned in a museum now. A tour guide takes you down into the mine, explains the history of the mine, and its significance to Poland. Built into the mine and its many cavernous rooms are hundred of statutes carved out of salt. The most amazing part of the salt mine was the largest of the 4 chapels in the mine. Every single thing in the chapel was sculpted from salt. The floors! The ceiling! The chandeliers! Check out the pictures below. Everything that is grey in the pictures is salt. (It turns white after it is mined and the imperfections are removed.) It was really incredible! 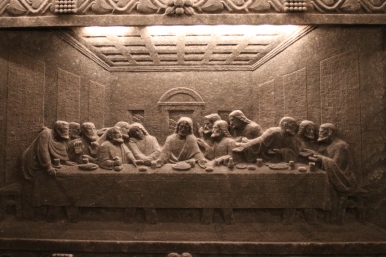 We arrived late back in Krakow. It was my last night so I took the city in by night one more time. I stumbled upon a festival in one of the squares in the Old Town and got one more traditional Polish meal for dinner. Krakow is such beautiful city, filled with the kindest locals, and made for a really interesting vacation spot.

I had an easy travel day back home with a long layover in the Frankfurt airport. I was able to find 2 People magazines which are basically my holy grail so I was ecstatic!

Ending my two week vacation was sad but I was ready to get back into the routine of daily life again. Plus, I was really starting to miss my host family. November has been a great month and I’ll be writing some updates on everything that has happened, including hosting my first Thanksgiving (!), in the next few days so look out for those coming soon!