The second part of my two week break started in the most unexpected of ways.

The night before, I bought last minute tickets to see Harry Styles in a venue that was walking distance from my house. It was one of the best concerts I’ve ever been to. If you knew me in high school you knew just how obsessed with One Direction I once was. Being able to see Harry solo was incredible. The spontaneity of the concert tickets made it even more fun! 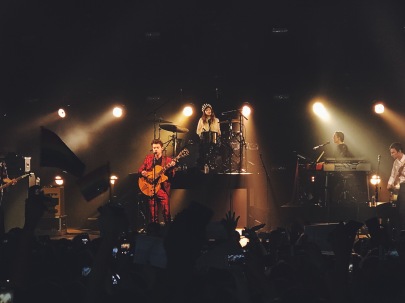 The next day, the 26th, was when my real adventure began. That afternoon, my college roommate Brynne and her sister Ansley, flew in for a girls weekend! This was both of their first time in Paris so I had a lot on the agenda for the few days we’d have together.

It all started at the airport. I told Brynne days early that I had plans to get drinks with some friends when they would be landing and that I would meet them later. Little did she know, I had already arranged to greet them at the airport arrivals gate! It was so fun and I’m glad it worked out because Brynne is really hard to surprise!! I couldn’t contain my excitement so the video is a little shaky and I sound a little like a cackling witch, but nonetheless, enjoy it below.

That night we got dinner together with one of Ansley’s friends who lives in Paris. I left them to settle in and get ready for the next few days.

Day 1 started with my favorite restaurant (so far) in Paris: Holybelly. Head’s up, if anyone comes and visits me, you will be eating here. They serve the best pancakes you’ve ever had and the savory stack comes with two fried eggs, bacon, and bourbon butter. I know, my mouth is watering too. After filling up, we made our way to Jardin des Tuileries. I left them here to walk the garden and the area around it, while I got to go meet some more friends who were in town! Some of our best family friends, the Perrins, were in Paris for a few days and invited me to join them for lunch. It’s so surreal to spend time with friends from home in my new home. I don’t think it will ever get old! I loved seeing them and catching up! I got to tell them all about my new life here. Any time with the Perrins is guaranteed to be a good time, and this was no exception!

Afterwards, I met back up with Brynne and Ansley and we crossed the Seine and wandered around St. Germaine. After a stop for some pastries and coffee, I took them to see my house. I was so excited to show them both where I live and introduce them to my host parents (my kids were out of town). We had dinner close to my house then went to the Louvre. Pro tip we stumbled into: go to the Louvre on either Wednesday or Friday nights when it’s opened late! There is absolutely no line, no crowds in the museum, and you get to see the pyramid lit up at night. We ended the night by watching the Eiffel Tower sparkle from Pont Alexandre. So dreamy~ 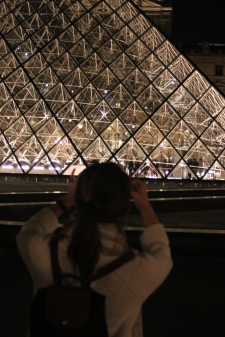 On Saturday morning, I met Brynne and Ansley in Montmartre where they were staying. From there, we walked up to Sacre Cœur. Up on a hill above the city, it has one of the best views in the city. After touring the church we decided to climb the 300 steps to the top of the dome in the church. WORTH. IT. The view was so incredible. 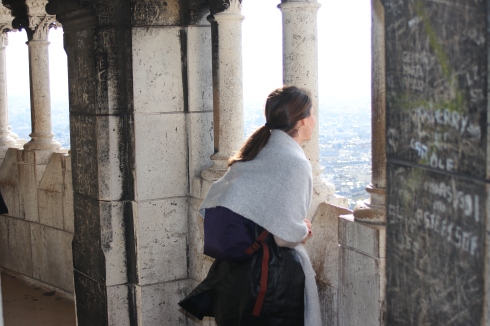 After lunch in Montmartre, we went over to the ninth arrondissement to my favorite donut shop, Boneshaker. They were celebrating Halloween which is very hard to come by in France so it was a real treat! They had so many fall themed donuts. Kids and parents were dressed up “trick-or-treating” at a few business around the neighborhood. It was just a small dose of Halloween but it helped fill the void. We enjoyed our donuts and walked Rue des Petits Carreaux, a pedestrian street in the ninth arrondissement. 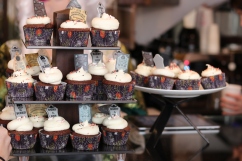 That night, we went to see the Eiffel Tower up close for the first time for Brynne and Ansley. What we didn’t know is we would get the most spectacular sunset in maybe the entire history of Paris. It went from a soft pink, to a the brightest blue with hot pink clouds, to electric orange. I seriously could not get over it. As we crossed the Seine to get closer to the Eiffel Tower, Brynne turned to me and said, “I never thought I’d actually get to see the Eiffel Tower in real life. I can’t believe this.” I’ll never forget that moment. What a great reminder it was to me of how special an opportunity I have to be able to have this time in a city so many only dream of; it is not lost on me, I promise. I am so happy I got to be there for Brynne’s first time in Paris. 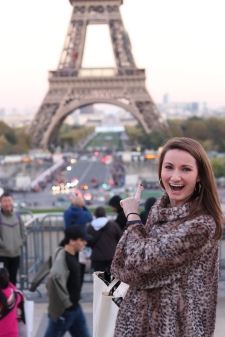 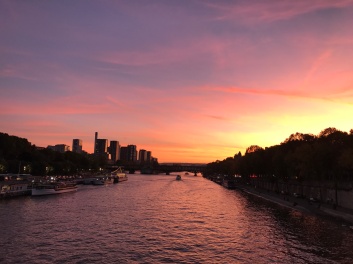 Our last day was (thankfully) our only rainy day. This is Paris’ rainy season so only 1 rainy day out of 3 is actually really good! I met up with Brynne and Ansley for croissants at the famous La Grenier à Pain in Montmartre. The line to get in the tiny patisserie was worth the wait. These pastries were the perfect mixture of flaky and buttery you’d expect in a good croissant. Despite the rain, we went over and walked around the Marais. We stopped for crêpes (our food tour was never ending on this trip!) and continued on to Notre Dame. The rain was actually in our advantage here because the line to get in was not very long. By the time we left the church the rain had stopped. We walked along the Seine for a while before making our way to the Ladurée on the Champs-Élysées for afternoon tea and macarons. 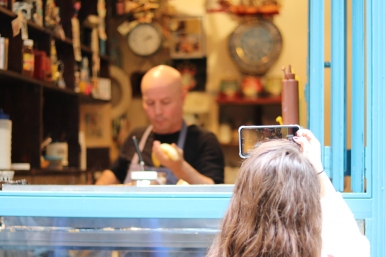 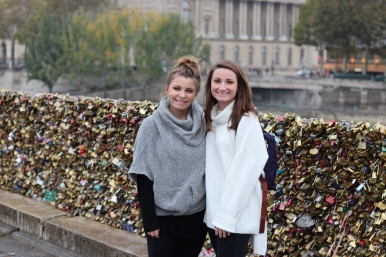 We ended our last full day with a boat cruise on the river. Our boat docked at the base of the Eiffel Tower, and left and returned on the hour meaning we were able to see the Eiffel Tower sparkle up close a few more times that night. I had never done a river cruise before and it was such a cool way to see the city. The sun set just as we were leaving so we go to see all the major buildings along the Seine lit up at night. It was a really magical way to end the best few days.

Their last morning in Paris, I met Brynne just down the street from my house to take her on to the roof of my friend’s apartment building. I think seeing Paris from a roof is one of the most authentic ways to see the city. Basking in the morning light, I was able to soak up the last little bit of time I got with Brynne. We met on bid day at Georgia on the lawn of ADPi. Eventually, we went on to share a house with 4 of our other closet friends for our last 2 years of college. Her friendship is one of the ones I treasure most in my life. I will always be so grateful and thankful for the time we got to share in Paris. 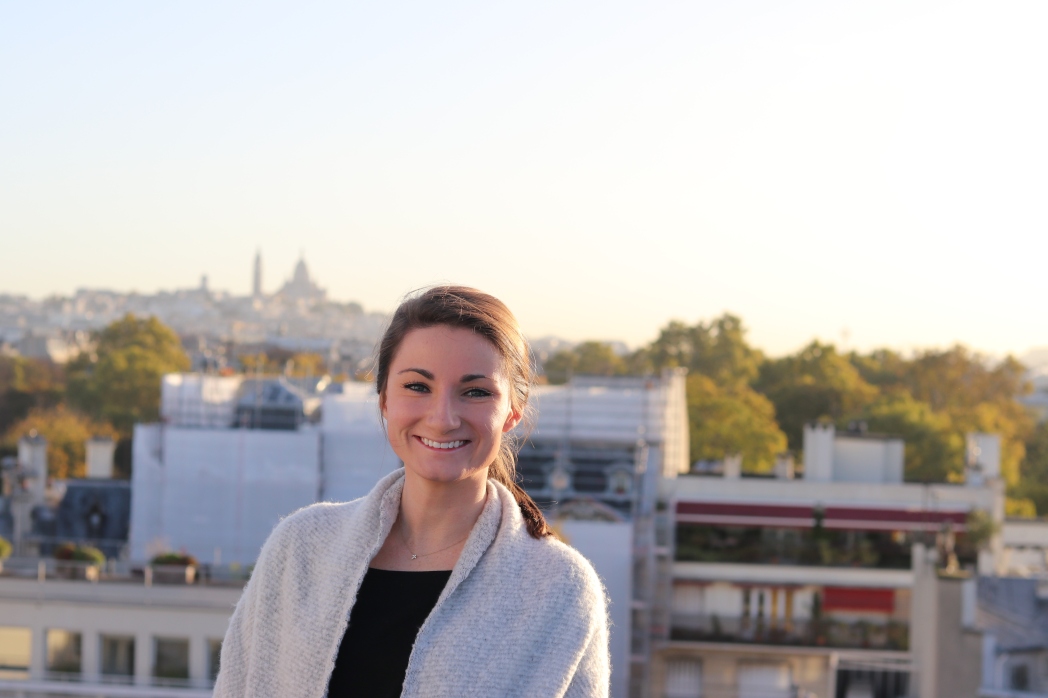 After one last breakfast at Holybelly, (yes, it is that good that they wanted to go back) I said goodbye to Ansley and Brynne as they boarded the bus to the airport. Thank you again to the Chappell sisters for letting me tag along on your girls weekend in Paris and for loving me so well!

While playing tourist in Paris was so much fun, I didn’t have much time to relax as I was already packing for my next big adventure, and final part of my break…

2 thoughts on “Paris with Friends.”